Net neutrality needs be better enforced (and better defined by regulators). Net neutrality of course bans discrimination. The question is does it also ban receiving payment as condition of data delivery?  — i.e., charge for data delivery, which is the key to the conundrums in Korea and Indonesia. Last week, Human Rights Watch and other big human rights organizations submitted a letter to President Moon of South Korea to oppose a new bill that would require payment of data delivery fees from content providers, separately from interconnection fees http://old.opennetkorea.org/en/wp/3410 . 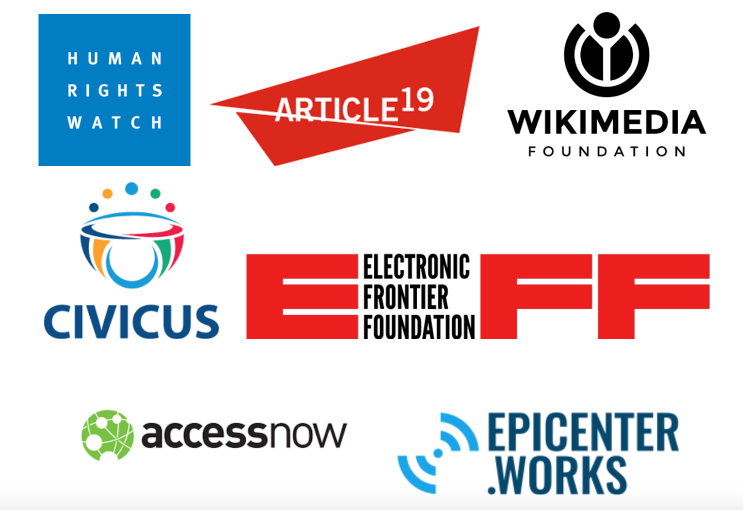 The idea was that such bill will cripple the internet. BEREC did reject European telcos’ proposal for sending party network pays rule in 2012 as shown below:

However, the proponents of the bill seem intent to apply the requirement to only those content providers already maintaining and paying for connection with the local ISPs, in which case the bill does not really mandate paid prioritization or SPNP termination feel but seems to require ‘paid peering’. The regulators have been absent on paid peering. BEREC did make a negative remark as follows on paid peering as well: 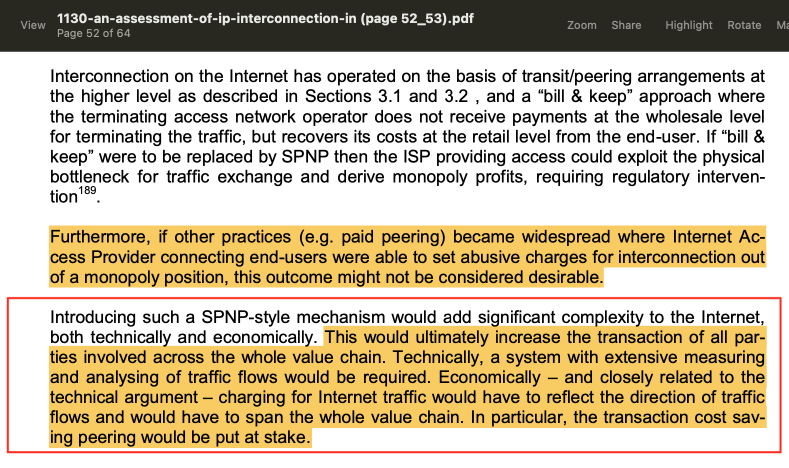 However, EU’s 2015 Open Internet Regulation does not have an explicit ban on paid peering.

FCC itself made clear that its 2010 non-blocking rule also prohibits charging delivery fees as shown below, while explicitly skirting the issue of paid peering. Because of that, the 2010 Open Internet rule did not prevent the Comcast-Netflix deal and the likes.

As a result, there has been confusion about what net neutrality exactly bans. The ISPs and the pro-ISP government of Korea explored this gap in eroding net neutrality : the government has since 2016 implemented SPNP among ISPs but not with respect to content providers.  This arrangement technically does not violate either BEREC’s 2012 comment or FCC’s 2010 order but it puts a lot of pressure on ISPs to shift the burden of settlement fees to content providers. As a result, Korea’s transit price became 8 times that of Paris. 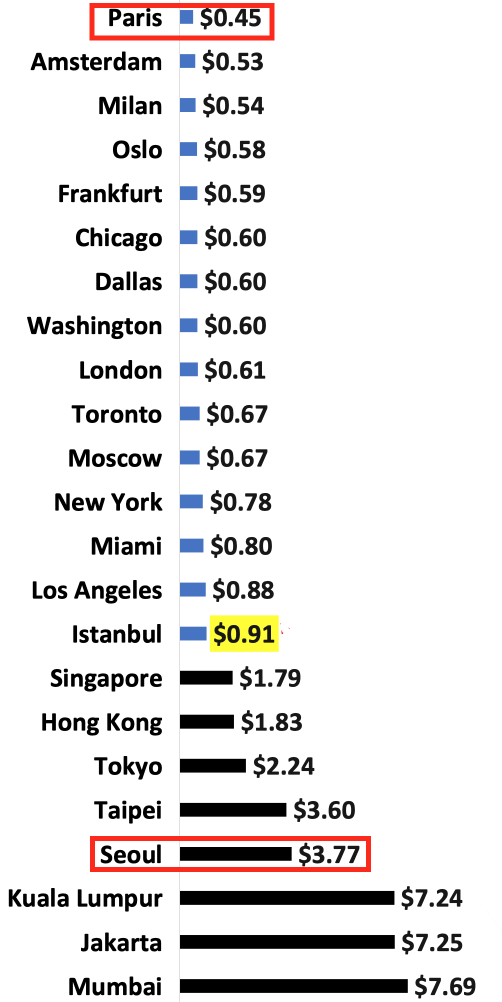 That is the prices that domestic CPs that have to rely on local ISPs in obtaining full connectivity. As to foreign CPs, Korean ISPs are trying to force them into paid peering, and the government is offering to making a law mandating CPs to do that. As FCC said, paid peering voluntarily engaged does not violate net neutrality although BEREC is very negative about it.

How about paid peering imposed by government?  Also, how about paid peering where big ISPs have enough clout to charge very high transit fees as in Korea due to the SPNP pressure? I think that BEREC and FCC have to be more clear about when paid peering becomes a net neutrality violation if it does at all (I think that it does otherwise many ISPs around the world can charge what is effectively termination fees under the pretext of “paid peering”).  We need better definition and enforcement. Indonesian colleagues were more successful than in Korea in fighting against the government’s plan to charge the internet by requiring all content providers servicing in Indonesia to enter into “partnership” with local telcos.

Write-up of the entire session:

The IGF Dynamic Coalition on Network Neutrality is a component of the United Nations Internet Governance Forum (IGF) and has been promoting Internet Openness since its inception, through a participatory multistakeholder process.

The DCNN advocates for open and secure Internet, accessible to all people. The Coalition has been promoting Network Neutrality as this fundamental principle plays an instrumental role in preserving Internet openness; fostering the enjoyment of Internet users’ human rights; promoting competition and equality of opportunity; safeguarding the generative peer-to-peer nature of the Internet; and spreading the benefits of the Internet to all people.

The early works of the Coalition have focused on Internet traffic management, stressing the need that operators’ practices should be transparent and non-discriminatory, to be compatible with the Network Neutrality Principle. Since its creation this Coalition has explored the various dimensions of Net Neutrality and of Internet Openness, acknowledging that Internet Openness is a multifaceted concept, and the debate on Net Neutrality and internet traffic management is only part of it.

Subsequent DCNN works have explored how price discrimination practices known as “zero rating” models affect Internet Openness, the fundamental importance of this concept in times of crisis, such as during the Covid19 pandemic, and the instrumental role of internet openness as an essential precondition of meaningful connectivity.

Importantly, Internet Openness serves the interests of the public by preserving a level playing field with minimal barriers to entry and by providing equal opportunity for the invention and development of new applications, services and business models.

In this perspective, Net Neutrality is necessary but not sufficient instrumental to preserve Internet Openness. Free competition among broadband networks, software and hardware technologies and all players of the Internet ecosystem is essential to ensure the openness of the Internet.

Besides relying on the network neutrality principle, the preservation of Internet Openness relies on Interoperability and on Device Neutrality.

Network Neutrality is the principle according to which Internet traffic shall be treated without discrimination, restriction or interference regardless of its sender, recipient, type or content, so that Internet users’ freedom is not restricted by favouring or disfavouring the transmission of specific Internet traffic. Exceptions to such principles shall be necessary and proportionate to achieve a legitimate aim.

Interoperability is the ability to transfer and render useful data and other information across systems, applications, or components. The combination of transmission and analysis involves several layers of the so-called Open Systems Interconnection model (OSI model), requiring the achievement of various levels of interoperability. At a minimum, one should distinguish the lower and the upper layer, pointing to a division between infrastructural interoperability and data interoperability.

Device neutrality is the property ensuring that users right of non-discrimination in the services and apps they use, based on platform control by hardware companies. That means users can have the possibility to choose which application they prefer to use, regardless of the brand of device they are using. In other words, device neutrality is instrumental to achieving equal access to applications, contents, and services, which is essential to achieve an open Internet. 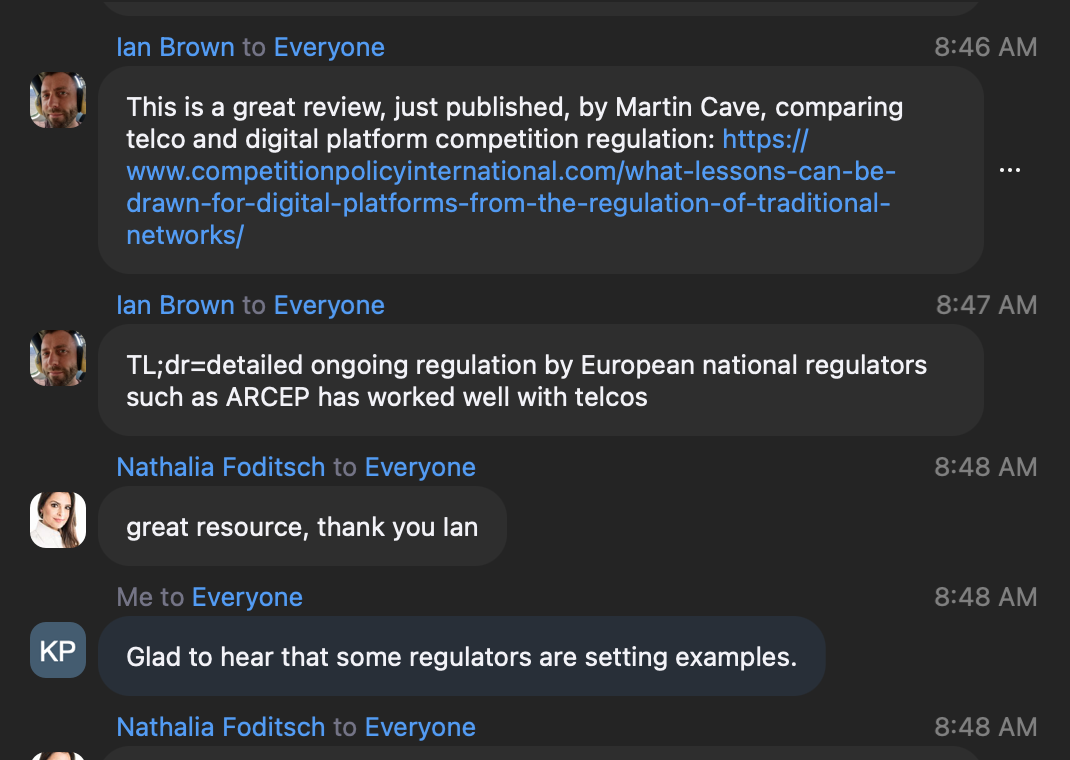 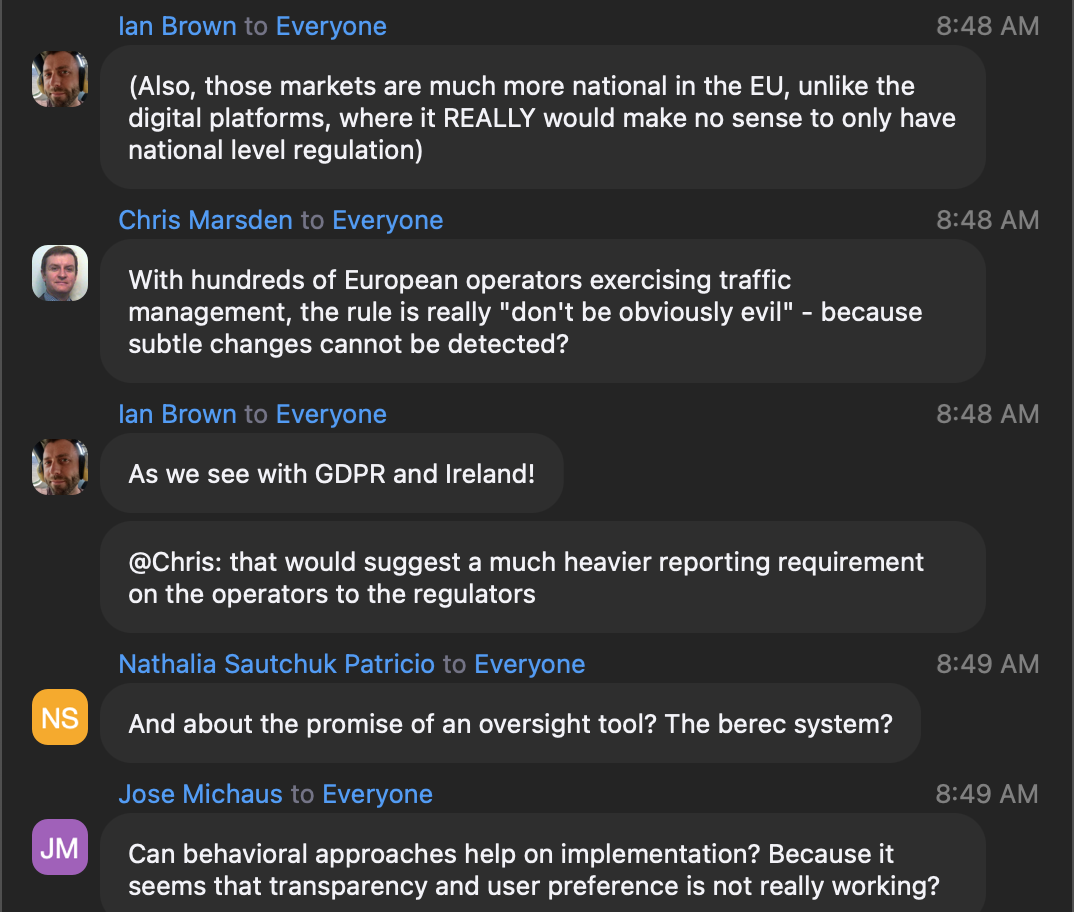 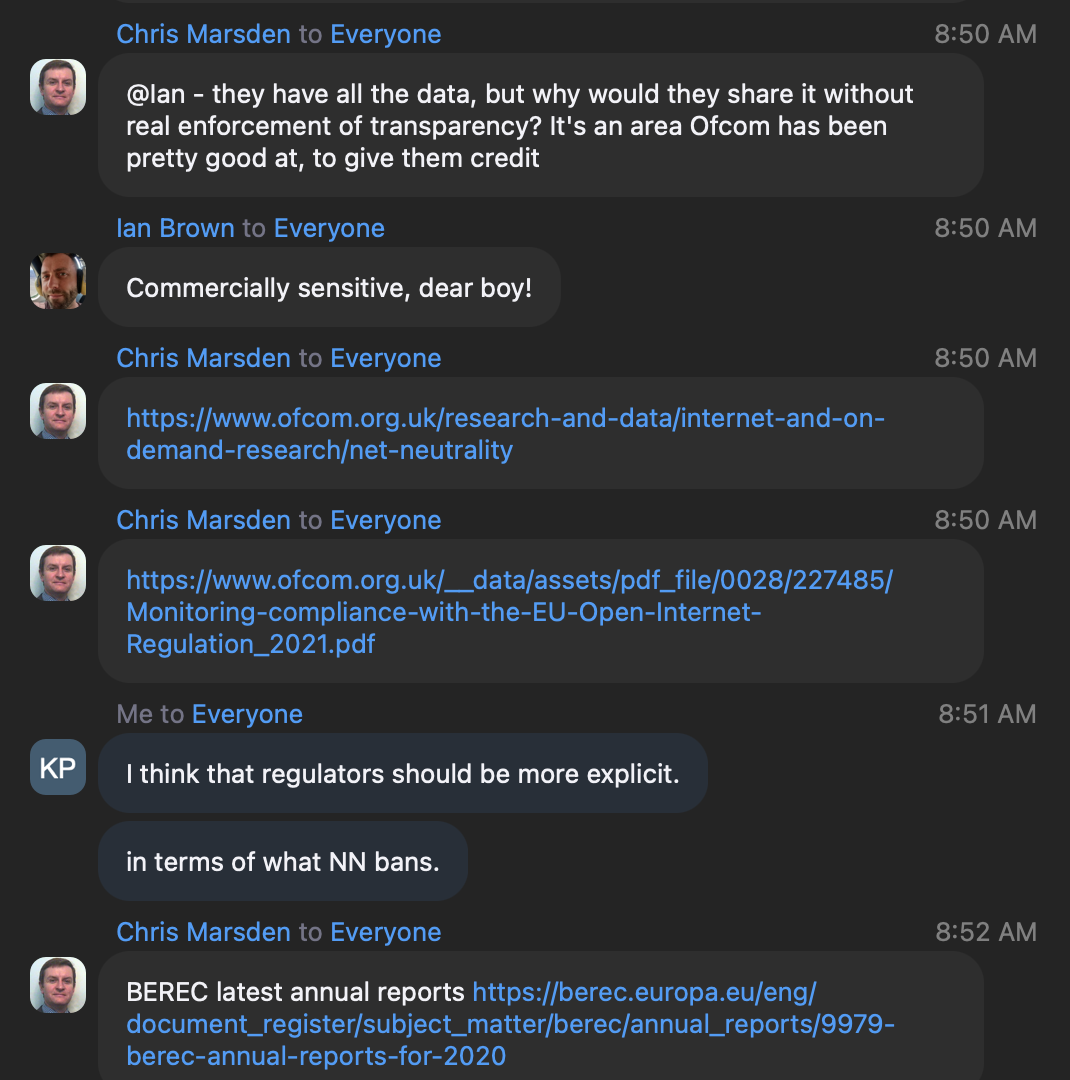 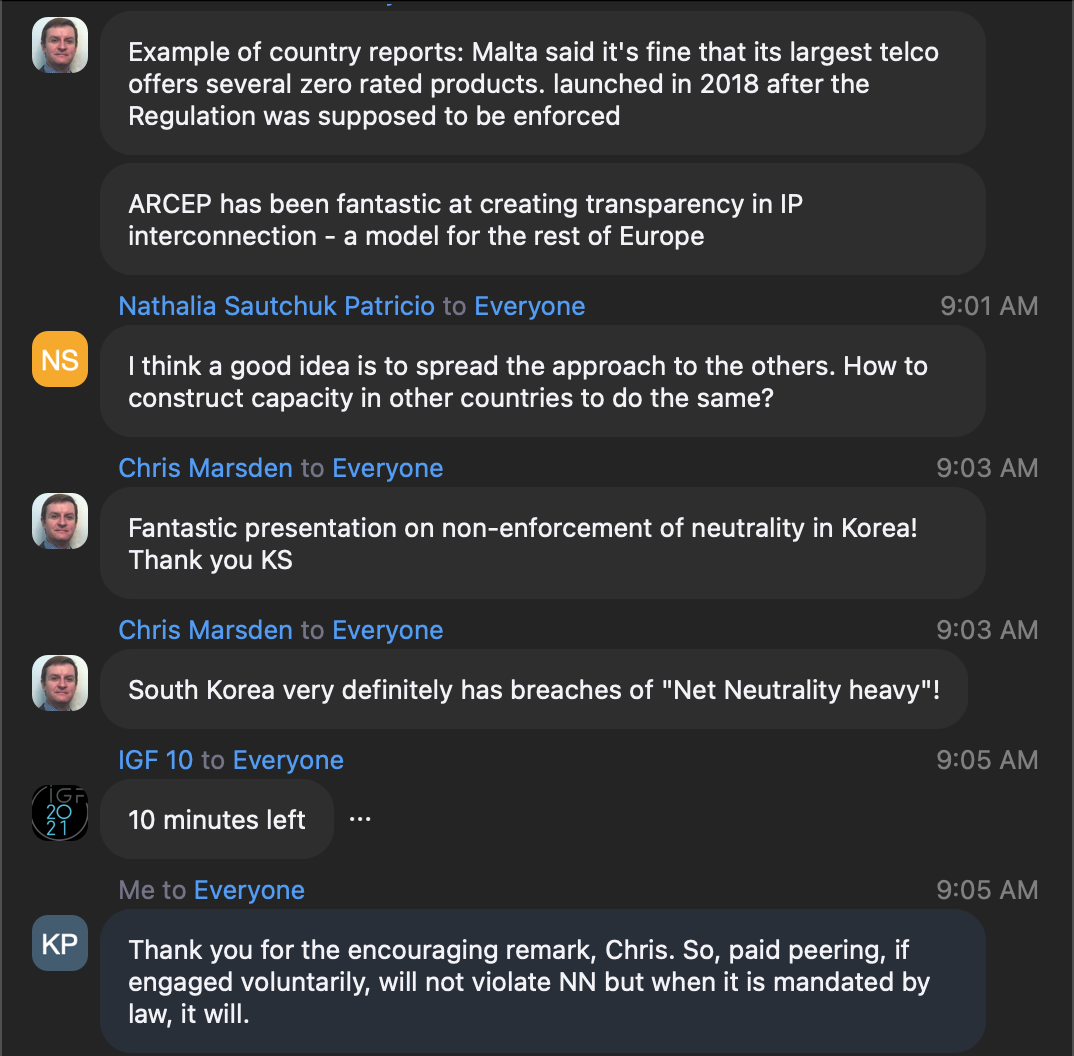 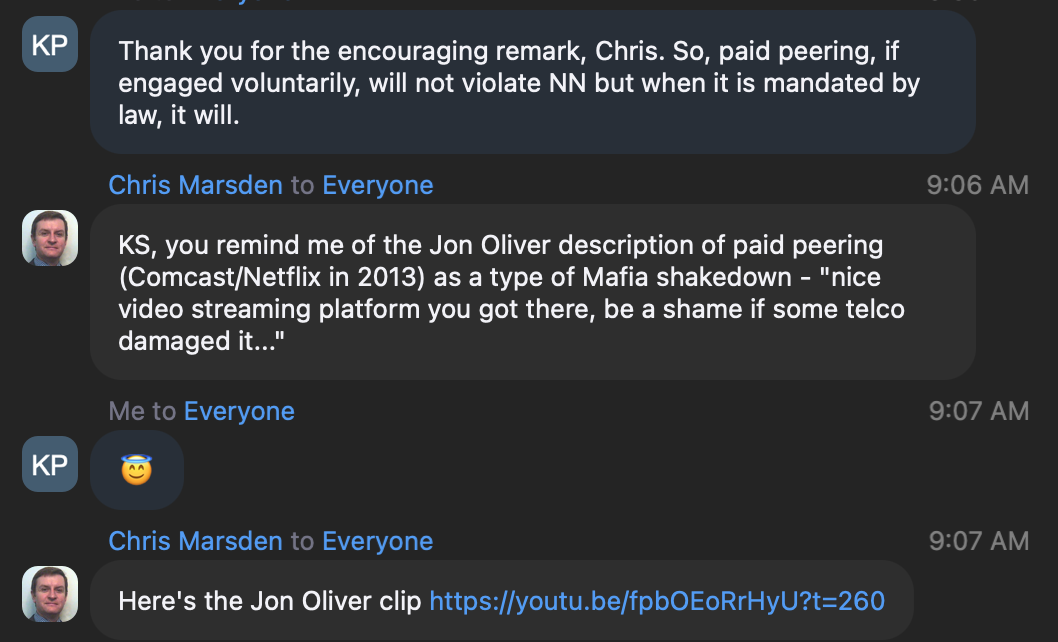