Around two months ago, Open Net was informed of massive blocking of P2P traffic by the biggest ISP in Korea, KT Corporation (formerly Korea Telecom). It’s shocking but we see it probable as KT was ranked as one of “the word’s top bittorrent manipulators” in 2009, 2010 and 2012. But we carried out a verification (for details, see [1] below), and found that KT has actually blocked at least 575 IP addresses of servers for P2P grid service from May 8 to October 7, 2015.

All of the IP addresses (some exceptions in blocking of September 21) choked by KT are for P2P grid servers, which were intended to provide hybrid CDN (Contents Delivery Network) services for webhard service providers (also known as cyberlockers). Unlike KT, other ISPs (SKT/SKB and LGU+) were found not to interfere with the packets for the P2P grid servers. Only subscribers of KT were blocked.

KT’s blocking is in a direct conflict with the network neutrality principle set forth in the Guideline on Network Neutrality and the Reasonable Traffic Management (December 26, 2011, Korea Communications Commission) and the Standard for Reasonable Traffic Management and Use of Telecommunication Network and for Transparency of the Traffic Management (December 2013, Ministry of Science, ICT & Future). The Network Neutrality Guideline and the Standard make clear that open and fair Internet environment is vital for sustainable development of ICT ecosystem and provide four rules for determining whether any traffic management is reasonable or not: transparency, proportionality, non-discrimination, and technical features. None of the four prongs are observed by KT.

The Network Neutrality Guideline and the Standard were first discussed back in 2010. In 2011, the Korea Communications Commission (KCC, a strong governmental regulatory body) took the lead of discussions with a diverse range of stakeholders for drafting the Guideline. Since the adoption of the Guideline in December 2011, KCC and the Ministry of ICT held dozens of meetings, forum and discussion tables with contents providers, broadband providers, civil societies, and scholars, and finally adopted the regulations in December 2013. In this process, KT was one of the most active participants and has extensively tried to achieve the interests of broadband providers. But the final regulations did not reflect their interests. For instance, KT demanded a clear statement of P2P control and traffic management under its service contract, targeting the webhard services and mVoIP, but all of them were rejected.

Now two years have passed since the adoption of the Network Neutrality Guideline and the Standard and it turned out that the regulations lie dormant. The regulatory bodies have not undertaken any investigation on the implementation by ISPs of the regulations. Even when the lawmakers asked detailed data on the P2P traffic management, the regulatory body simply forwarded the ISPs coined data – no P2P traffic management for the last three years. To ensure the fair and open Internet by fully implementing the Network Neutrality Guideline and the Standard, we submitted a request to the Ministry of ICT and called for an administrative guidance to stop and prevent KT from blocking the P2P grid traffic in a discriminatory way.

We obtained all of the IP addresses allocated to servers for P2P grid services. The servers are owned by KGrid and hosted by four IDC (Internet Data Center) providers (KNIX, Gabia, NuriHosting and Amazon). We put those IP addresses the destination field for “traceroute” command executed by KT subscribers’ PCs. When conducted with several different PCs and IP addresses, it was revealed that certain four routers, owned by KT, dropped packets without forwarding next routers. 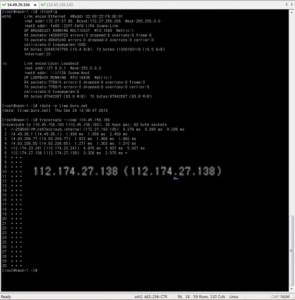 In order to confirm if the blocking by KT is intentional, we kept changing the IP addresses of P2P grid servers. Surprisingly enough, KT has traced them in real time and blocked all of the packets. This indicates that KT employed DPI (Deep Packet Inspection) solution to detect the P2P grid traffic. This is not new. Reportedly, KT bought Sandvine DPI devices with about KRW 100 billion. And KT confirmed, during the discussions of the Regulations, that KT used the DPI solution to detect and managed the mVoIP traffic.