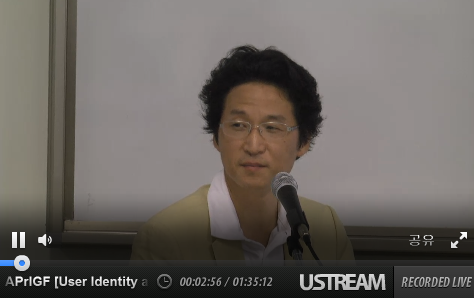 Workshop Title: User Identity and Anonymity in the Cyber Space

Shahzad Ahmad, Bytes for all, Pakistan

A brief summary of presentations (If any)

Kyungsin Park raised a matter of ‘paradox of trust’ by giving real name system in S. Korea, where the identification number that used to identify user’s identity in the anonymous cyber space, became to have so much values to hackers as to threaten user’s privacy. And then, he explained on what grounds internet real name system had been decided as unconstitutional by the constitutional court last year, and worried about, regardless of the decision, the system still continued to work because of other laws which forced user identification.

Shahzad Ahmad also criticized the situation in Pakistan where huge databases of citizens had been sold to other countries, but peoples had no means to protect their privacy, and then gave some examples of how non-anonymity could threaten people’s life.

Hamada Tadahisa – Anonymity in the cyberspace in Japan

He explained how we were losing our anonymity in real space, cyberspace, and both space, and criticized the problem of common number law and secret protection bill which had been newly adopted in Japan. Lastly, he proposed several recommendations for protecting privacy.

Jinkyu Lee presented, in line with Kyungsin park’s presentation, how internet real name system had been applied, even after the decision of its unconstitutionality, in regards to internet payment system, age verification and online game, and then criticized the problem of the system in the aspect of its effectiveness, privacy violation and security weakness.

A substantive summary and the main issues that were raised:

A participant raised the issue of telemarketing by the telecom, how is it possible and how could we respond to it. Kyungsin Park answered that if telecoms would share user’s personal information for telemarketing, it could be illegal, so User’s voice and action including legal suit would be needed.

It was not only the matter of mobile telecommunication providers, but millions of phone numbers were being collected from the internet and sold. Government should regulate it. But people should speak up for that. Consumer rights movement would be needed to protect our privacy.

Regards to internet real name system in S. Korea, Kyungsin park pointed out that the system misled policymakers into preferring ID verification, so be transmitted to other policy areas and to other nations.

Another participant raised the problem of PRISM revealed by Snowden. This issue is not presented or discussed in this workshop because it’s not directly related to the subject of this workshop. However, government surveillance would be related to user identity or anonymity in that it’s very important for the government to identify who is the target of surveillance.

User’s movement is very important to preserve the right to anonymity.

PRISM issue should be discussed in-depth in the future forums.