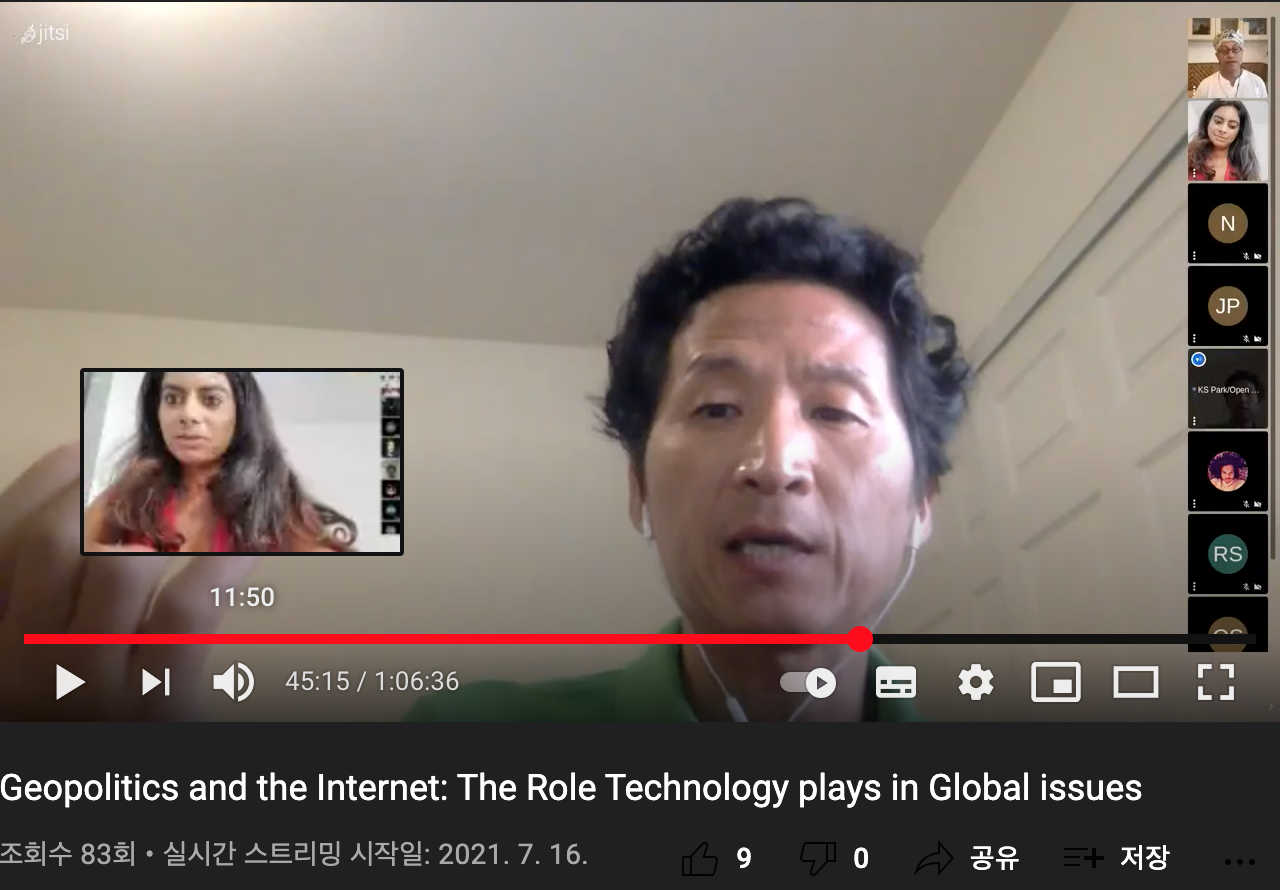 K.S. Park spoke at the panel on “Geopolitics and the Internet: the role
Technology plays in Global issues”  as part of the conference organized by SFLC.in “Time to Let the Net Work” from 8:15 AM ET-9:45 AM
ET on July 16, 2021.  The report on the event can be found here: https://sflc.in/time-letthenetwork.

Internet regulation can be cross-polinated directly into or followed by other jurisdictions but it can spread through competition between two hostile jurisdictions.  Trump’s attempt to protection privacy of American citizens by keeping Huawei out of US market will only have the escalating and rationalizing effect on China and other competing jurisdictions to intensify their own data localization efforts. Hopely, it will be different under Biden administration.

There is too much at stake here to allow such escalation.  If we are talking about ICT sector, I think that we are exaggerating the negative role that tech plays in global issues. If at all, ICT sector helped people rebel in 2011-12 around the world through Jasmin revolution.  The perception changed after the world experienced emergence of ISIS which used digital platform to recruit. Russia began spreading pro-government propaganda through using ICT, and China used ICT for the rather beneficial purpose of shaming out corrupt officials for instance through Weibo and then usurped technology for surveillance purposes, not promoting ICT.

Probably, the single most important event on which ICT sector affected the global politics is the Snowden revelations which coalesced into GDPR, which are now affecting the Atlantic trade. However,, there are other technologies that hugely impacted global issues, especially extractive industries. The only reason Myanmar dictatorship could survive for so long is thanks to the technology and capital provided by foreign companies such as POSCO International, Unocal, etc., which showered the junta with so much resources.

Internet is a different kind of technology. Other technologies are exclusively owned by developers from the beginning, are bound to cause inequality and often support authoritarianism. Internet is not really a technology but a social compact. It is a set of rules whereby we will communicate through computers. There is a reason why hundreds of human rights organizations mushroomed since 1995 just for protection of the Internet as a space for sharing and openness, which includes Open Net Association, based in Korea.

What we need now to control is monopoly. We need antitrust enforcement. Not some response to technologies. There is nothing wrong with technology. We just need to apply the same antitrust rules that we have applied.  Internet was made for little people.  Return of the powerless unorganized individual is the manifest destiny of the Internet.  If a couple of platforms are using their monopoly power to expand their profits without creating value for consumers, it is the converse of that destiny.