On May 28, 2015, Open Net held in Seoul an international seminar on intermediary liability regimes jointly with Harvard University Berkman Center for Internet and Society, members of the National Assembly, and other institutions and associations of relevance in Korea.  At the seminar, the presentations of Naoko Mizukoshi and Eric Goldman, and the discussions between K.S. Park of Open Net and Kyong-soo Choe from the Korean Copyright Commission triggered a debate on an important question:  “Does the international norm on intermediary liability ‘obligate’ the intermediaries to take down noticed content?  How about Korean copyright law?”  Before the seminar, it had been widely accepted in Korea that the copyright law was properly amended in 2011 to adopt, for instance, the U.S. DMCA safe harbor.

The following chart shows the relevant provisions at a glance, edited for simplicity, which related to a third party posting upon which someone sends a takedown notice to the intermediary hosting it (“noticed posting”, hereinafter): 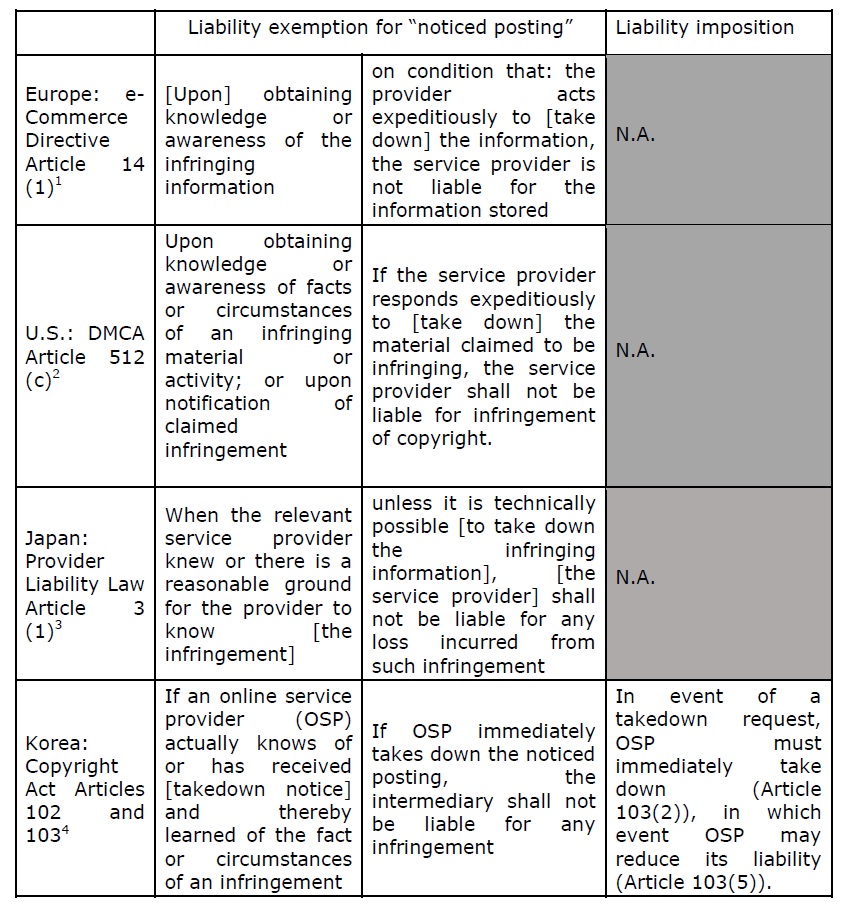 As you can see from the above chart, it is clear that Korea tried to adopt a provision approximating the safe harbor provisions of EU, US, and Japan, through Copyright Act Article 102.

The impact of such mandatory notice-and-takedown is clear.  The Internet will be censored of even lawful contents upon anyone’s capricious intervention, i.e., takedown notices, above and beyond the already censorial effects of the current safe harbor notice-and-takedown system. (footnote 5) Encouraged, the putative rightholders will intensify campaigns of overbroad takedown notices, which the intermediaries are then again obligated to act upon.

The liability-exempting language in Article 103 (5) following the obligatory Article 103 (2) is meaningless because intermediaries are already legally required to take down the posting.  Even without the mandatory takedown, intermediaries already lack any incentive to maintain ‘noticed’ postings anyway because they pose legal threats vis-à-vis the putative right-holder’s claims.  Given the mandatory takedown, an intermediary who does not comply may risk being held liable for maintaining perfectly lawful contents.  The risk is too great for the intermediaries.

What is more problematic, many in Korea overlooked Article 103 and believed the Copyright Act to be a sound adaptation of the international norm and especially an adoption of the U.S. DMCA Section 512, and a similar mandatory notice-and-takedown system was replicated in other areas such as defamation and privacy infringement.  For instance, Article 44-2 of the ICNA (footnote 6) imposes a mandatory notice-and-takedown obligation on intermediaries for any posting that anyone claims to be infringing on his or her rights regardless of its lawfulness (as interpreted by Constitutional Court 2012.5.31.Judgment 2010Hun-ma88).  The Internet will be censored not just by unsubstantiated claims of copyright infringement but also by unsubstantiated claims of defamation and privacy infringement.  The ICNA does not even have a genuine liability exemption provision, which constitutes the world’s only pure mandatory notice-and-takedown system.  This is politically very important because defamation is very often used as a legal basis for the powerful to suppress the opinions critical of them as documented in “Korean Intermediary Liability: Not Just Backward but Going Back” (footnote 7) by K.S. Park, Open Net. 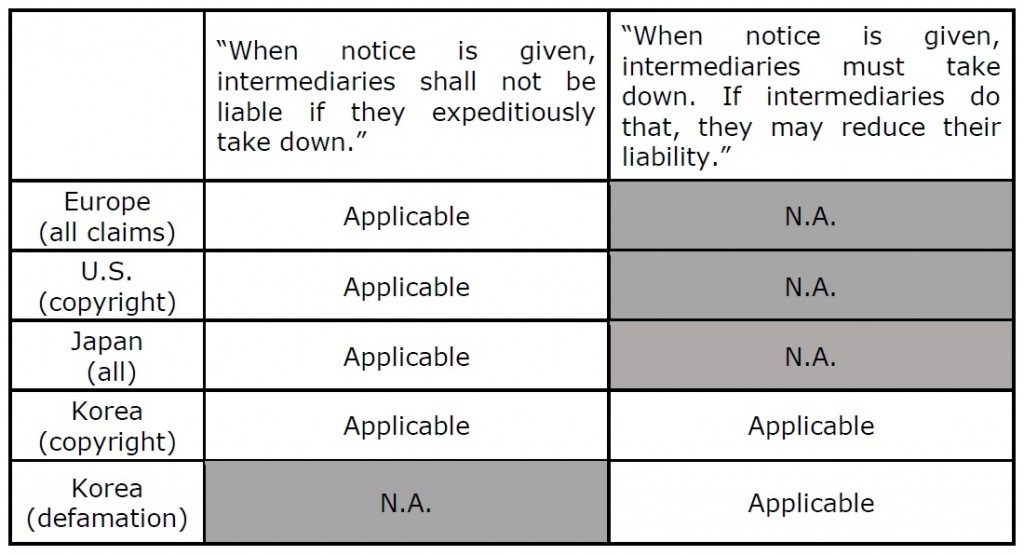 In order to comply with the international norm, the country’s Copyright Act and ICNA need be amended to create true safe harbors.  The time is ripe for such amendment as the Korea Communications Commission already submitted a ICNA amendment bill that aims to institute a post-takedown restoration process apparently in order to synchronize the Korean law with the international norm – albeit with a couple of local adjustments.  The bill can be tweaked just a little bit to address the misunderstanding newly discovered through the Seoul seminar, for instance, by joining the two sentences into one as follows:

As to the Copyright Act, simply explicitly stating that Article 103’s obligation is an obligation only for those intermediaries wishing to benefit from the safe harbor will suffice.  Especially, Korea is required by Korea-US FTA to synchronize its law, and both mandatory takedowns in Article 103 and Article 44-2 frustrate the purpose of Article 102 safe harbor provision and therefore are potentially in violation of the FTA.  A good news is that simple semantics seems to be all that is needed for correcting the Korean intermediary liability landscape.